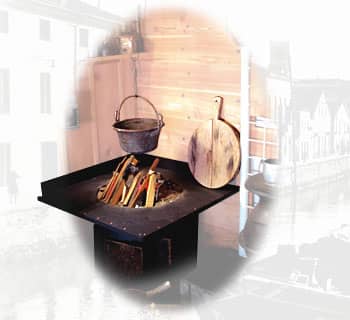 Boats and components
A cross-section shows the composition of the boats, the various types used for transport of goods or people and how they were constructed. Of special interest are the scale models of the burcio“Lina”, one of the last of this type of riverboat in operation, and the cross-section of the mainmast of a Paduan burcio, the type of boat common in the Veneto region and the symbol of river navigation. Against the wall is the rudder of the burcio “Spes”, 4.50 m. tall, complete with its rigòla(tiller), with the reduction made following motorization of the craft highlighted.

Boatyards
On exhibit are the tools and equipment used in the squeri, the yards in which the boats were built and repaired and, at one time, there were many of these along the river. Working in these yards were carpenters, blacksmiths, caulkers, sawers and other skilled laborers. The hall displays a yard hoist in wood and corresponding taje (tackles) for beaching and launching the boats. Displayed on a number of panels are the various tools used by squeraroi (yard workers) to cut, saw, measure, shape and drill, as well as samples of materials, such as the pégola that was spread on the hull.

Hydraulic works, goods and navigation routes
This room contains historical information about the waterways, hydraulic works and goods transported. There are a number of maps of the waterways that underscore the importance and complexity of the Padua waterway system fed by the Brenta and Bacchiglione rivers. Trachyte rock and calcrete flake from the Euganean Hills, riverbed sand extracted using the bailón, and coal, grains and fertilizers from the port of Marghera, were the goods normally transported by the burci. Battaglia was the sorting point for material arriving from and going to the Euganean Hills and this role was further reinforced with the construction of the boat basin (1923) that opened the short route towards Chioggia, shown here in a large scale model.

Propulsion Methods
Freight boats were wind-propelled, pulled by horses or pushed along by the boatmen themselves using long oars. In the post-war period, these propulsion methods were replaced by inboard motors. On one side of the room the various traditional means of propulsion are shown (93 square meter mainsail and lower mast of the burcio “Nuovo Antonio”, oars and rowlocks, rigging systems, etc.), and on the other the components of motorized propulsion (axles, inverters, deadwood, navigation lights, tugboat models).

Life On-board
These boats were not just used for work, they were also actual houses. Below deck, in the bow, lived the marinèro (sailor) and morè (cabin-boy), and in the stern the skipper, who could be either the parón (owner) or, more often, the boatman. In addition to the accessories required for navigation, such as anchors, boathooks and the sèssola (used to bail water from the boat), the boatmen carried aboard everything they needed for daily life, for example the bóta for water, moschéto to keep insects away from the food, wooden trunks for linens and wood-burning stove

Go to the gallery